Impartial LGBT+ news for a world that isn’t

Openly is a global digital platform delivering fair, accurate and impartial LGBT+ news to a world that isn’t. Powered by original coverage from the Thomson Reuters Foundation, Openly also aggregates select LGBT+ news and authoritative reports from other sources, with the ambition of becoming the ultimate destination for trusted LGBT+ news and information from around the world. All original content available on Openly is also distributed directly to all Reuters clients, reaching more than 1 billion readers a day. We believe news has a key role to play in advancing human rights and in fostering fairer, more prosperous societies, in which no one is ‘left behind’ - to use an expression borrowed from the Sustainable Development Goals. As an independent news organisation, our mission is to raise awareness and inform society through fair, accurate, and impartial journalism that can affect government policy, shape legal reform, assist law enforcement, empower civil society and engage business. Drawing on the expertise and global footprint of Reuters News, all our stories adhere to the highest standards of accuracy, independence and integrity.

Today, 70 countries around the world criminalise consensual same-sex activity or use laws to marginalise and persecute members of the LGBT+ community. Discrimination against LGBT+ people is often reinforced by laws, policies and practices that either fail to take LGBT+ needs into account or deliberately exclude them. 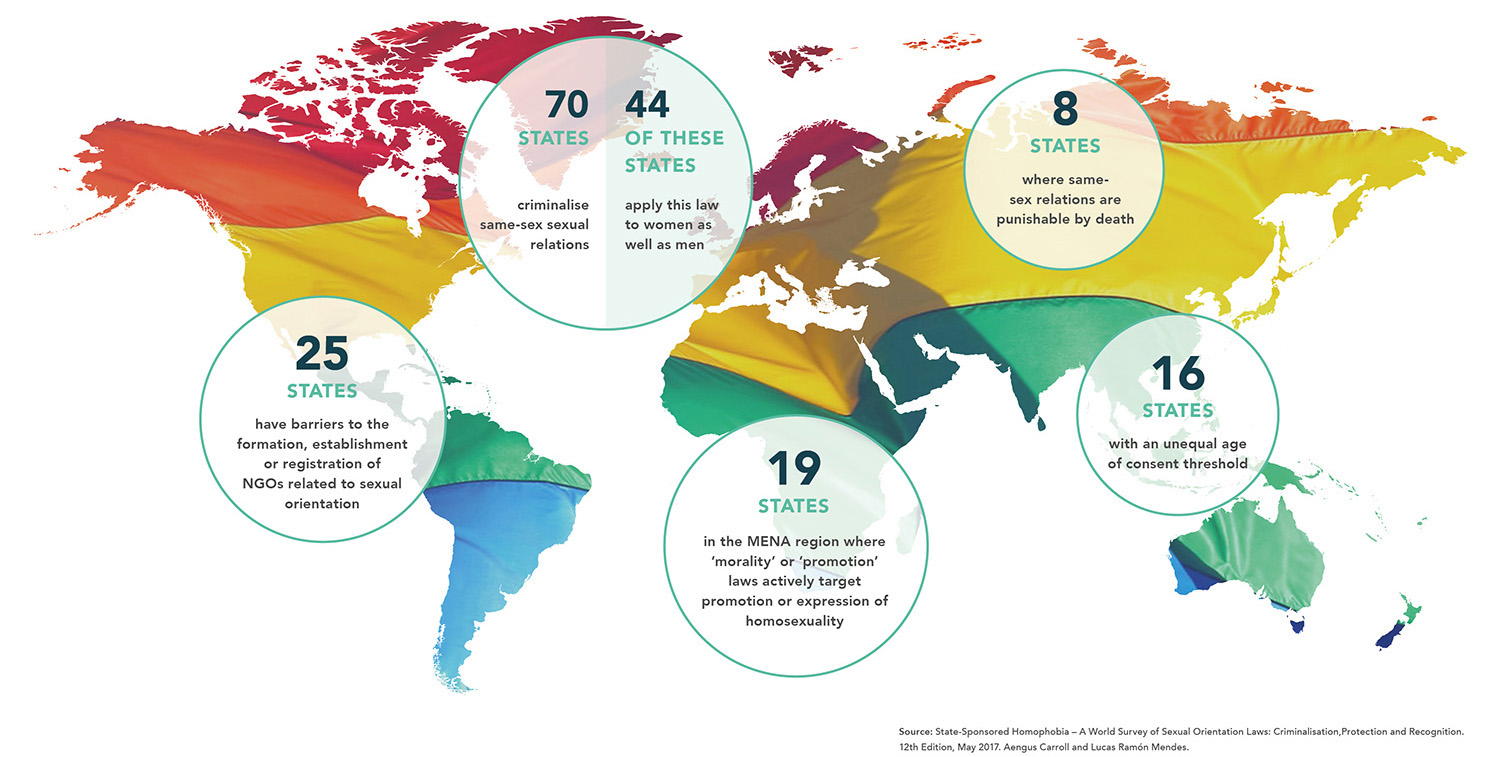 Globally, the list of discriminatory laws and policies includes: making same-sex relations illegal; forbidding LGBT+ groups to form non-governmental organisations and publicly campaign for their rights; excluding same-sex couples from accessing social services; requiring trans people to undergo forced sterilisation before they can change their legal gender; and failing to provide opportunities for trans people to change their legal gender. These laws, policies and practices reinforce negative social attitudes and hamper socio-economic progress, producing a negative impact often felt beyond the LGBT+ community and across entire countries. As a result, millions of people are excluded, marginalised and exposed to the fear of arrest and imprisonment. Their dignity is harmed, their potential capped and limited.

At the Thomson Reuters Foundation, we believe in the fundamental equal worth of every human being. We believe that every person should be able to fully participate in society, regardless of gender, race, sexual orientation and gender identity. There is a strong need for a global, authoritative news and information platform on LGBT+ rights, one that sheds a light on under-reported stories from around the world, providing unbiased, non-advocacy, trusted content which is of interest to everyone. That’s what Openly is all about.

Openly to the world